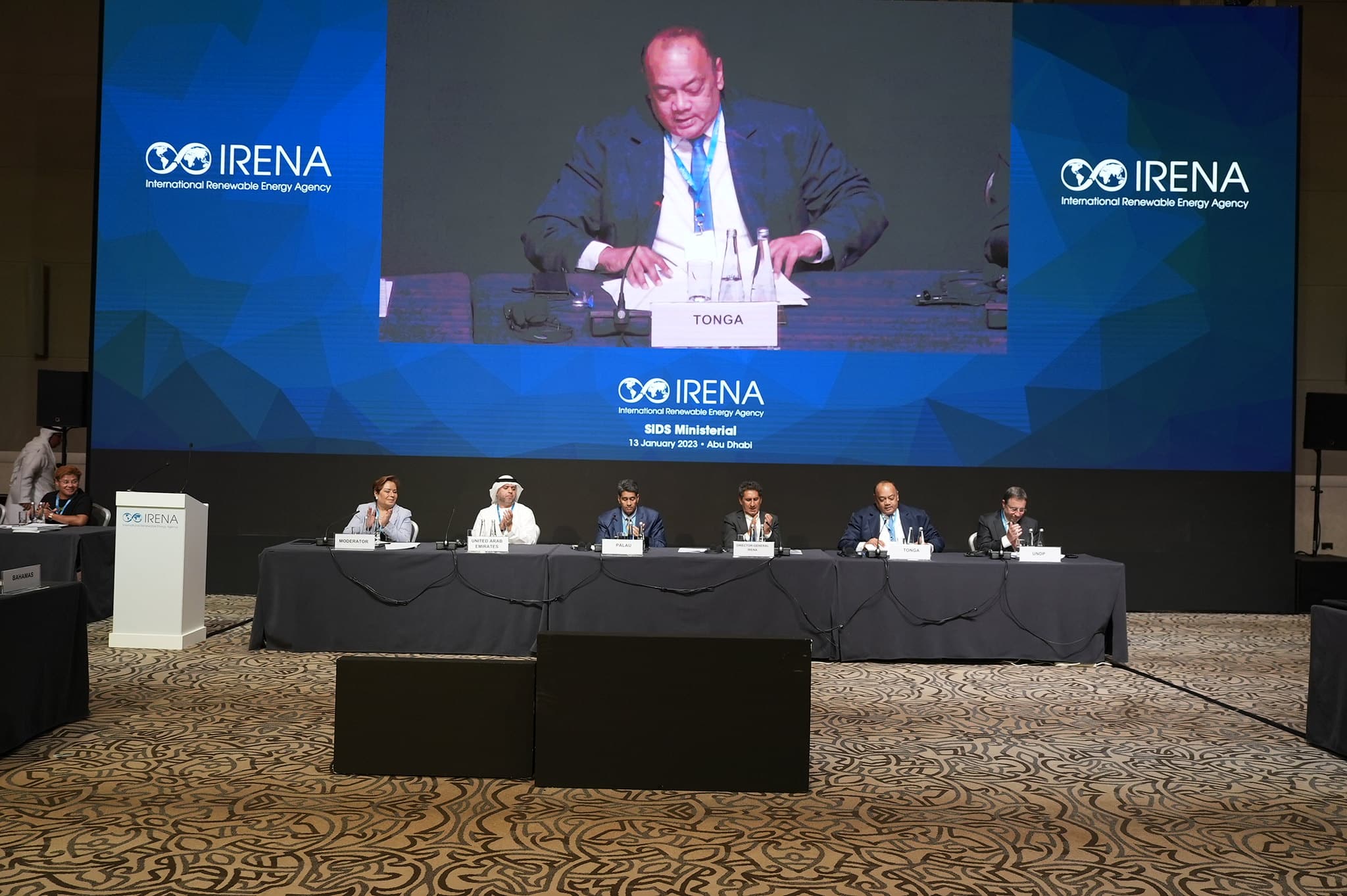 The SIDS DOCK Delegation was headed by Honourable Siaosi ‘Ofakivahafolau Sovaleni (Hon. Huʻakavameiliku), Prime Minister of His Majesty’s Government of the Kingdom of Tonga and President of SIDS DOCK, who was also accompanied by Dr. Kakau Foliaki, Director of Energy, Department of Energy, Ministry of Meteorology, Energy, Information, Disaster Management, Environment, Climate Change and Communications (MEIDECC). Hon. Huʻakavameiliku delivered opening remarks at a side event on the margins of the IRENA Assembly, the SIDS Ministerial on Climate Pledges To Action: Amplifying Energy Transition For Sustainable Development In SIDS, that provided an opportunity for the Prime Minister and President of SIDS DOCK to promote the “President’s Personal Initiative (2022-2023): Commercial-Scale Deployment of Ocean-based and Waste-to-Energy SIDS-Appropriate Technologies,” and to also promote, “Dominique,” the 1.5 megawatt (MW) Floating OTEC Platform being developed for deployment by Global OTEC, by 2024, in São Tomé and Príncipe.

Hon. Huʻakavameiliku noted that Small Island Developing States (SIDS) are less competitive as they have the highest energy prices in the world, plus, they face specific challenges when it comes to solar and wind power, leaving their largest renewable resource, the ocean, as the best alternative for energy security. “SIDS have limited land space for solar farms, and our economies will never be competitive with intermittent sources of energy such as wind and solar. Most of us are islands thriving on corals and volcanic materials from millennia, with not enough biomass on land to generate sufficient energy. However, we have one resource, our largest and the largest on the planet, and that is the ocean”, declared.

Global OTEC and its partners are developing OTEC technology for deployment across SIDS, Least Developing Countries (LDCs) and Coastal Nations. As a SIDS DOCK Special Advisor, Neil is able to interact more deeply with members of the SIDS community, who reported that going green is not going fast enough, as despite the enormous needs, international public spending contracted even before the Covid-19 pandemic, and the private sector considers most infrastructure projects too risky and the returns too small. “Projects that are essential for economic growth in developing nations are not getting done. For many SIDS, OTEC is the only solution for sustainable energy. While bioenergy, solar and wind may make up the largest global share, they are not the best fit. Ocean energy can offer many other benefits. OTEC can supply quantities of cold water as a by-product. This can be used for air conditioning and the nutrient-rich deep water can be used for aquaculture and the creation of a sustainable local economy. OTEC can also be coupled with desalination for drinking water and the production of ammonia and green hydrogen. Global OTEC is breaking barriers in pursuing public-private sector agreements that are helping to attract global private sector attention and unleashing the real potential to gain access to trillions of dollars”, Reynolds shared.

Under the President’s Initiative, the Prime Minister of Tonga has taken the lead on behalf of the SIDS, to aggressively develop the first Ocean Energy indicative project pipeline. He noted in his remarks that a group of dedicated private sector partners is currently working with SIDS through partnership agreements with governments, such as Global OTEC, under a Memorandum of Understanding with São Tomé and Príncipe and SIDS DOCK. “They have developed SIDS-Appropriate Technologies and getting ready to deploy them as commercial demonstration pilots”, added.

Hon. Huʻakavameiliku said the SIDS Ministerial provided a dress rehearsal and an important platform to provide SIDS’ partners, donors and supporters with information about their plans and programme for their energy transition that they intend to showcase at the 28th session of the Conference of the Parties (COP 28) to the United Nations Framework Convention on Climate Change (UNFCCC), scheduled for 30th November to 12th December 2023, in the United Arab Emirates (UAE). “We intend to showcase our SIDS indicative project pipeline comprising Ocean Energy projects that involve the development and deployment of thermal, wave, floating wind and solar and other technologies, developed specifically for SIDS, and this is being done through public-private partnerships”, the Prime Minister noted.

Hon. Huʻakavameiliku closed his remarks by thanking IRENA for the invitation to address the SIDS Ministerial. He also extended special thanks to the Government of the United Arab Emirates for being “an outstanding and welcoming host,” and said that he, his delegation and SIDS DOCK Partners, including Global OTEC, are eagerly looking forward to returning to the UAE, at the end of the year.